A Comparative to Today

Revelation 1.3 Blessed are they who read and those who hear the words of the prophecy of this book, and keep those things which are written in it; for the time at hand. Meaning, if you understand the things that are written, they are relevant for you in your day.

We, as believers in Christ, know and understand that all things are held together by the power of His word. That Christ  is before all things and in Him all things consist.

CERN is home to the Large Hadron Collider (LHC). With the LHC, CERN scientists are  trying to undo the things that are made by smashing particles and atoms against each other, that are held together by God. They claim to have found the god particle. https://home.cern/resources/faqs/cern-answers-queries-social-media 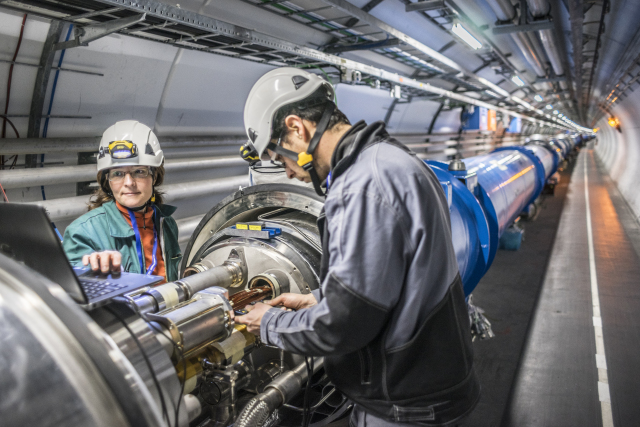 What an insult! God is a particle? They reduce God to the smallest common denominator known to man? Blasphemy! This concept is actually a fight against the Creator.  The scientists at CERN willingly admit they are playing with anti-matter, dark matter and distorting the building blocks of creation. This is an outright act of defiance, as if to shake their fists at the Creator?

At the entrance to one of its buildings, CERN has a statue of “Shiva the Destroyer” the anti-creator. This statue shows their intention. The Destroyer has other pagan names;  “Abaddon” and “Apollyon.” Both are referred to in Scripture (Revelation 9). They all mean “The Destroyer.”

The Watchers and the overseers  of CERN know they are playing with fire, and fire produces smoke. That is why scripture says that an angel fell and the bottomless pit was opened, “And smoke arose out of the pit like the smoke of a great furnace. So the sun and the air were darkened because of the smoke of the pit.”

However; the sun that is darkened is not the one in the sky above the earth but the Son of God, of whom scripture says, “3 All things were made through Him, and without Him nothing was made that was made. 4 In Him was life, and the life was the light of men.” He is the true light that shines into the world. The true light that the created sun mimics. The Son, the True Light, is what the smoke from the pit darkens, and the pit is a cavern in CERN that holds the LHC. With this they try to pass matter back into its original state of being invisible through stages of disassembly.

As the elect, we know Scripture was given to describe realities invisible to the carnal senses, with Christ’s words saying, “Seeing with their eyes they see not, and hearing with their ears they hear  not. For it is with the heart that one must see and hear to understand the things of God”. Gods things are outside the relm of humanly tangible particles. To have faith is to believe in the invisible, and without this kind of faith one cannot know or please God. (Hebrews 11.1-6)

Everybody is looking for physical signs while they interpret God’s words, and so they are confused. Such is the case with the smoke from the pit. You cannot see it with your eyes, but everyone knows our air is filled with waves of  technological  mis-informstion.

Just as we have TV and radio waves infesting our homes with the capacity and drive to promote despicable things. We also have cell phones and the internet polution plaguing the human mind, without the naked eye recognizing this smoke from the pit.

We cannot deny the ubiquitous, godlike permeation of these waves with total saturation. Scripture says of God that, “Nothing is hidden from His sight.” Technology seeks to imitate God with eavesdropping and photo taking. This is the smoke of that pit that fills the air; waves traveling through the air, with the intent to occupy and make sick the minds of humanity.

The push for free cell phones to the poor is world wide. Over 70 percent of the population has one now. https://www.statista.com/statistics/274774/forecast-of-mobile-phone-users-worldwide/  The goal is cellular containment and thought control for all humanity.

GOD’S MANDATE TO THE ELECT

God gives us the mandate to, “Be renewed in spirit of your mind” becomes blurred, obscured and hidden. Instead the mind is now preoccupied  with too many other things,  mainly technology.

Scripture says of this smoke that “it is something like locusts” dispatched to plague the minds of those “that have not the seal of God in the forehead.” In other words, it is in the spirit of the mind that the change takes place. The same place salvation takes place. Those who overcome the smoke are immune to the plagues. They are “over comers” and see right through it. We know who is behind it.  Satan, the god of this age is behind it. But he has nothing in us who are “in Christ.”

We are in the modern-day sorcery of pharmaceuticals. In Greek, the word pharmakeia means witchcraft, which are the drugs of today. They are prescribed today to help people cope with these plagues. Scripture also says that these “repented not of their sorceries,” meaning drugs. People are more likely to blame these plagues on global warming then interaction from the Creator who holds all things in place. God is responsible for creation and not CERN or man made global warming.

Technology at CERN knowledge is pedaled. When you get past the smoke screen, that is all it does, collects knowledge about everyone and pedals it. Your data is collected with tracking, watching and listening to everything you do.  This knowledge is used to exploit you and to manipulate your beliefs and behavior. It tracks your likes, dislikes, and desires by the keystrokes you type on your computer or cell phone while targeting your appetite with advertising from the information about you which they’ve tracked.

Every time you press the phone button you get a dopamine high with psychotropic results that mentally excites you, leading you into the herd mentality that has been created through technology. Your own shared brand of crazy with like minded of those they link you with.

The watchers and conductors who feed you these brands of crazy, work for their advantage of leading you into forms of nationalism, prejudices and pitting political and religious groups against each other to bring about chaos, dissension and hate. In this way they exercise population control. They use Satan’s old adage of conquer and divide. This is the main tool of his trade; deception.

GOD GIVEN KNOWLEDGE VERSUS SATAN’S CERN

In scripture the knowledge of God is given to us, the elect. God is exploited in scripture for salvation , “to as many as receive Him, to them He gives them power to become His children, even to those who just believe in His name.”

But with Satan’s CERN, mankind is the known, being exploited to neutralize people from being saved by God so they can use people for their cause; the collection of human souls for slavery. Whereas the elect’s exploitation of God is godliness, god-likeness. Cern’s exploitation is to profit off mankind for their quest; to harvest your thoughts, feed your thoughts, to control your actions and, primarily, to deactivate your mind from hearing God as you chase the gods of this age that imprison you. You become allies with them by accepting their terms and conditions. This insulates you from God as you give yourself to this beast.

This wickedness seeks to restrict you to your laptop and cell phone, the place where this opposition and mind control takes form. There is a reason it is called a cell phone. C.E.L.L. , get it? Prison cell. A cell is always an enclosure, an encapsulation, a containment. And because they control your thought processes with this, they deactivate you from your God given cause of being godly, to being a slave to their system.

Even the world wide web’s logo is that of a net wrapped around the world. Indicating a trap for its inhabitants and a web of confusion, for the enslavement of humanity.

The God given purpose of all of creation itself is to bring forth children of God. “He who the Son sets free is truly free” and He frees His from that. We are above the smoke and confusion. We are free from these things and see them clearly because of our aerial view being “seated in the heavenlies in Christ.” For God is spirit and God is truth and seeketh such, and such are we. But woe to those who do not transform but remain as mere inhabitants of the Earth “for Satan has come down to you having great wrath” because “he knows his time is short.” This plague will compound deceiving and being deceived.

There are those of us who have risen above the smoke, occupy a stratosphere of the Spirit of the God of truth. We are those who have victory over the beast, over his mark and over his name. We see below us the angel flying in the heavens above the smoke with the eternal gospel .

Warning! Do not let modern day religion sell you short, or rob you of your reward, but press in and “lay hold of why Christ laid hold of you.” This is our duty, roll and goal: to acquire our God given inheritance. The inheritance He has given while we are in this age and no other. For the day is coming when it will be said, “He who is unjust, let him be unjust still; he who is filthy, let him be filthy still; he who is righteous, let him be righteous still; he who is holy, let him be holy still.” https://www.biblegateway.com/passage/?search=Revelation+22%3A11&version=KJV Then the door will be closed, the time to cross over will be done and the possibility of being saved from these things will have ended.  For “Today is the day of salvation” and no other.

…..lest you wake up and are a shame that this day has passed you by.